By Placement Team2nd April 2019 No Comments

We are excited to announce that Soccer Assist clients Edward Alderson and Jack Price have secured places and committed to Angelina College on partial scholarships. Edward formerly played for Pro-Direct Academy, whilst Price previously played for Haringey Borough FC. Both will be joining the Angelina College soccer roster this fall. 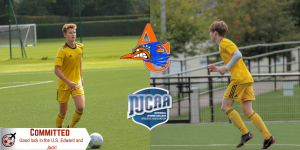 Angelina College’s assistant coach, Fergus O‘Connor, is thrilled to have Edward and Jack on board and is excited for them to start playing in the NJCAA division. O’Connor told Soccer Assist that they’ve been talking about Edward and they like his soccer ability a lot. For Jack, O’Connor said that the team are “so excited for him to play at AC this fall.” Edward and Jack are heading out to Texas this August to start their scholarship journeys.

Both players attended one of our Trial Days last year – with Edward attending one in London and Jack attending one in Brighton. Both have shown great progress since. Soccer Assist Director Junior stated Edward is “a commanding centre back who organises the back four and also has the ability to play out.” and that he “will be a successful freshman for sure.”

For Jack, Junior is quoted as saying that he “makes things happen on the pitch. He picks the ball up in tight areas, runs at players and threads final balls.” Junior surmises that Jack will be a great addition to Angelina’s attack. We would like to wish both of our clients well during their time at Angelina College and we look forward to seeing what they can do next.

If you would like to follow in the footsteps of Edward Alderson and Jack Price, contact us directly by registering for a call. To do this, please complete the form that can be found in the link below: